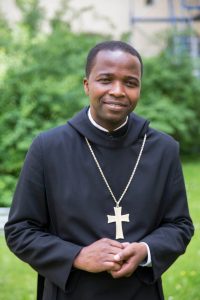 There was an election in the abbey of Mvimwa, entirely in the west of Tanzania, in the beginning of June as well. Abbot Denis, the predecessor, has resigned out of personal reasons only after three years. The community has strongly grown in the last years and consists of over 80 monks, out of which 45 were allowed to elect. They gathered on Tuesday after Pentecost and started with the election under the guidance of Abbot President Jeremias. On Wednesday, Fr Pambo Mkorwe reached the required majority. He was elected “in absentia” because as Congregation Secretary he lived in St Ottilien. There he helped in the leadership of the Missionary Benedictines. He had to give up this task he adopted in October 2016 and embark on his journey back to Tanzania. On August 26, 2017, the local bishop gave him the abbatial blessing.