This is the question I am asked most frequently. None of our recent foundations has provoked a similar interest. Answering the question is not easy. There is on the one hand the inner growth of our fledgling community. It is growing, not very fast but steadily. In March 2015 the first Cuban monk made his vows, others are planning to follow suit. The external growth is not exactly rampant; the construction of our first proper monastery requires approval statements from 7 government departments. And there are surprises. Recently we learned that the whole plot could be flooded and is therefore out of bounds for any construction. A few months later, after intensive research and Überzeugungsarbeit the objection was lifted – saving our future. It took us two years to get the permission to import a new tractor from abroad. The paper has now arrived and we can place the order. Meanwhile, we have managed to obtain an ancient Russian vehicle – at least something, so that the first roads into our future farm can be made. Sopmetimes things drag on, and everything appears bitterly bureaucratic, and then suddenly there is a leap forward, – often promoted “from above”, and in Cuba that is not a metaphysical category. 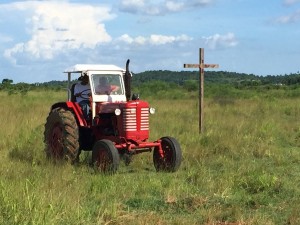 „Everything is going to change now, right? “ On the day of my arrival the US embassy in Havanna was officially reopened by US foreign secretary Kerry. The thawing between Havanna and Washington so far has little impact on daily live, however. Except that there are more tourists. Rental cars are hard to get, and hotels in Havanna are fully booked. But everywhere you meet young people who have lost hope and plan to leave the country. That can be very painful, as our community discovered when one of our best friends over night decided to move with his family to Miami. He wanted a better life for his children, tired of just keeping hope alive. When Pope Francis visits Cuba in September he is going to speak to the Cuban youth. The state youth organization requested such an encounter, on the topics of future and hope. Many expect that this will be the most important moment of the papal visit. Hopefully he will find the right words to inspire young men and women with confidence and courage in order to believe in the future of Cuba. He will have things to say for those who who want to shape that future, to, I suppose.

Our Benedictine presence in Cuba is a small testimony of hope for Cuba’s future. We want to live here and build something up. Our first vow is stabilty. We have kept the faith with many countries, and good days and in bad days. 127 years in Tanzania were not always easy, but our perseverance, sometimes bordering on obstinacy, has made us become part of that country and people. We hope that we will succeed in this here, too. The burden of this perseverence is carried by the brothers at Havanna. I have the privilege to wivist them from time to time, in a country which – long after the initial infatuation – has become very dear to my heart. „People here are always happy when you come. That anyone should keep coming back for them is like a gift!” our prior recently told me.